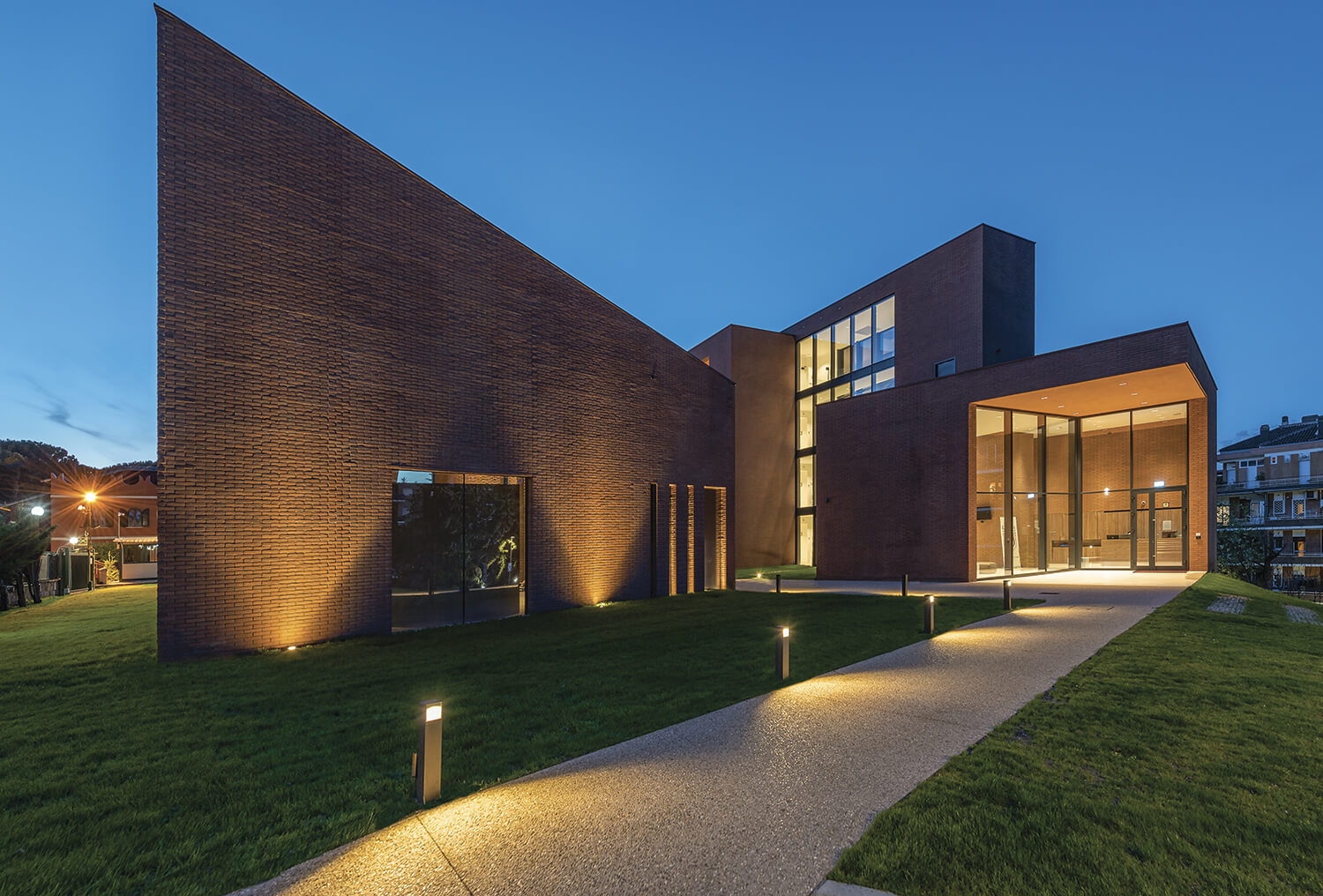 A lighting change for the John Felice Rome Center campus

For many years, its panoramic views of the Eternal City and the Vatican Hill made the Balduina district in north-east Rome a popular film location. And since 1962 its northern ridge has been home to the orderly building complex that makes up the historic Rome campus of the Loyola University Chicago, which was founded in 1870 and is one of the most important Jesuit Catholic universities in the United States. This campus, the John Felice Rome Center, recently underwent an expansion that included the construction of new halls of residence for the students, a chapel and an entrance hall, and the redefinition of the external transit spaces.

The new complex, designed by architect Ignazio Lo Manto, demonstrates great sensitivity to its context and displays a gradual transition from old to new, underpinned by Lo Manto’s choice for the main building material, brick. The structures’ shapes, simple, geometric and free from conventional features, further help to link the new architecture to the old visually and explicitly. Other materials, such as steel and glass, complement the brick, and together they combine to create quasi-abstract geometric units that reinforce the relationship of the complex with its surroundings.

The lighting design, carried out entirely by L&L Luce&Light with fixtures chosen by Gianni Celleno of Elettroged (Rome), was integral to the architectural project. Here, light becomes a physical element, revealing the buildings’ composition and the intersections between them. The light gives form, bouncing off the interior and exterior flooring to establish a hierarchy between spaces and mark out communication routes. The interaction between light and space reaches its greatest intensity in the chapel, where it creates an almost mystical atmosphere. The light flows in through a large trapezoidal skylight above the altar and reflects off the travertine floor and the front of the altar.

Inside, the projectors used for the architectural lighting run along the oblique corners between wall and ceiling and provide a grazing light, as do the Neva 1.2 linear profiles. The latter are positioned at the foot of the architectural representation of the cross, their narrow, recessed optics guaranteeing excellent visual comfort. Bitpop concealed downlights were chosen for the functional lighting in the entrance areas, while Bright 1.6 recessed uplights with narrow optics were installed in the long, slender openings. Bright 5.F uplights were positioned along the chapel’s exterior walls, where their wide beam is achieved with elliptical optics. The external walks connecting the spaces are lit by Linear single- and double-beam bollards, in different heights depending on the zone (250 cm or 600 cm).

The project’s requirements have been satisfied in full: the lighting has taken on a role that is not only functional but also aesthetic and sensory – it interacts with visitors and communicates emotions, producing an atmosphere that is conducive to prayer and study.