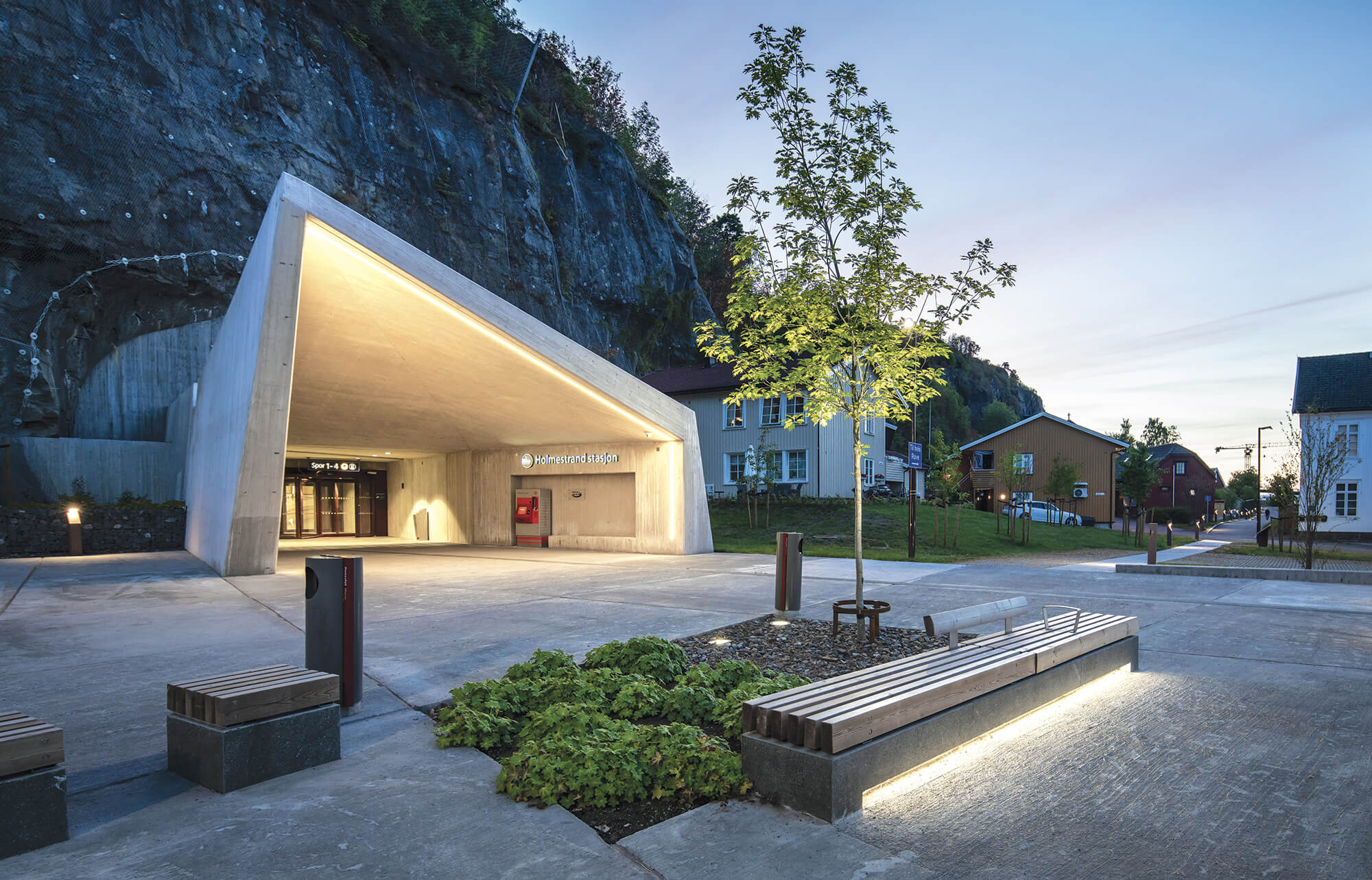 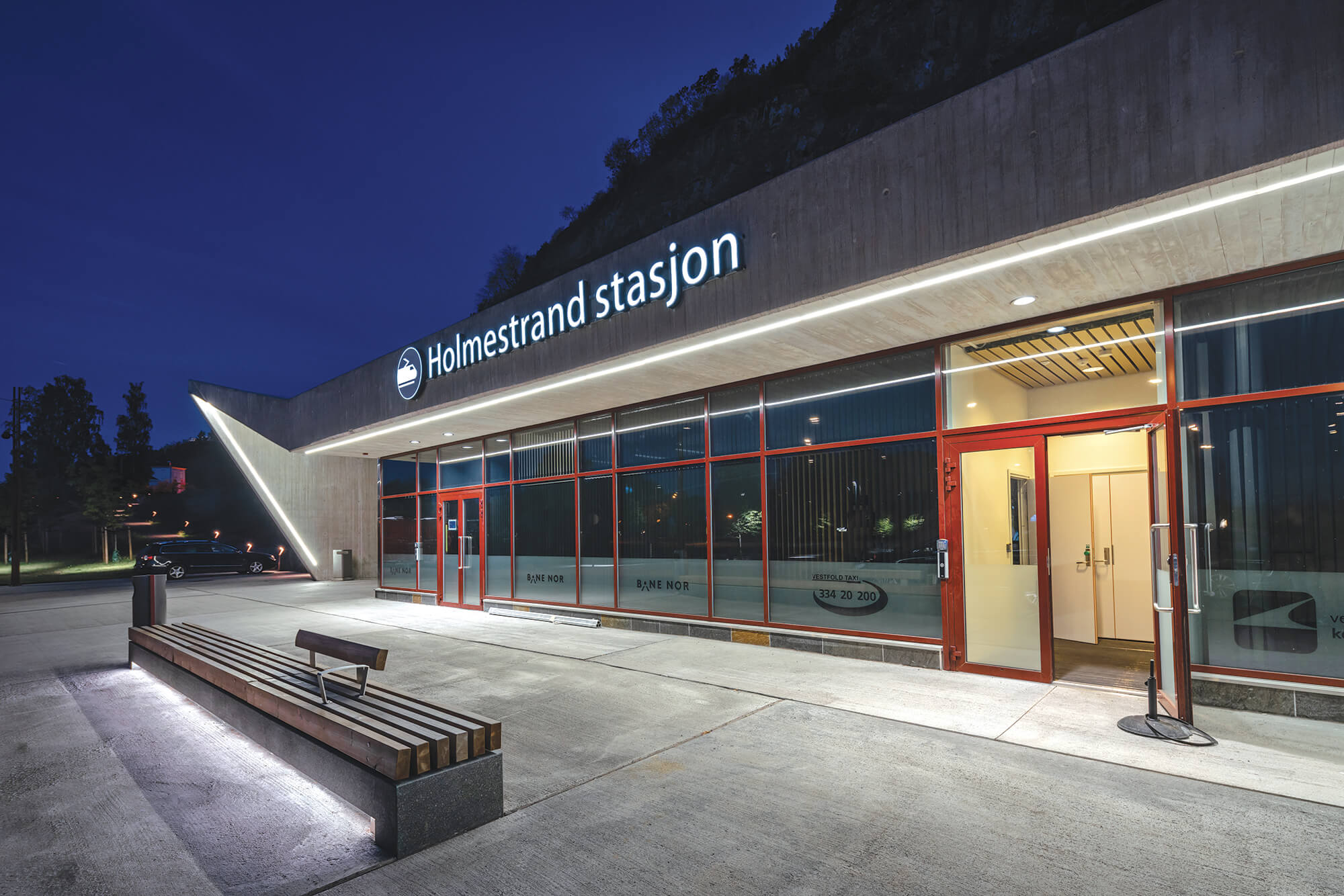 Surrounded by sinuous fjords and immense, silent forests – the familiar features of traditional Norwegian fairy tales – Holmestrand, a coastal town in the county of Vestfold og Telemark, looks out across the icy waters of the North Sea. Here, new works of architecture maintain their link with the region’s DNA: the structures and forms are chosen with full respect for their surroundings. Equally, the inspirations and influences that come from the natural environment are a constant in designs, merging smoothly into the Scandinavian style.

Built inside a mountain, it serves as a junction for both local and high-speed trains. This unique, spectacular project will modernise rail traffic along the west coast of Oslofjord. Rambøll Norge AS, an Oslo consultancy firm working in construction, architecture, transport and urban development, has designed the site with two new entrances to the structure. One of these is in the south, in the centre of Holmestand, and the other is in the north, with a passenger terminal, rest area, bus station with associated services, and a car park with space for 200 cars.

The architecture of the two entrances was the work of Gottlieb Paludan Architects, who set the grey concrete structures in the mountainside with inclined planes that form sharp angles to each other in a clear allusion to the outlines of the rocky peaks. The result is an architecture composed of dramatic lines that explicitly demarcate the boundary between inside and out. The spaces were designed with geometries that appear to grow and develop out of the mountains into the outside world. The access tunnels have ceilings that slope gradually upwards as you move further into the station.

The lighting concept was aligned with the architectural design concept, following the style chosen for the railway station. The lighting design, by Rambøll Norge AS, specified the installation of L&L Luce&Light stainless steel outdoor Rio 2 linear profiles with diffuse light recessed into the structure. This striking solution underlines the entrances’ contemporary design while also satisfying the functional need to light the area for the passengers entering and leaving the station. The light emitted from the LEDs has a warm colour temperature (2800K), complementing and enhancing the sense of space. In keeping with the aesthetic approach to the building itself, it creates a pleasant and inviting atmosphere.

The Rio profile assures continuity of light between fixtures installed end to end, something that was fundamental to the aesthetics of this project, both to increase the general sense of brightness and comfort and to set off the building and reinforce its significance in the space. The geometric lines of light are integrated perfectly into the architecture, so that the light appears to float as if suspended in the air. The characteristics of Rio 2 fixtures are compatible with the environmental conditions and climatic variations of their setting: with an IP67 ingress protection rating, IK10 impact resistance and IPS (Intelligent Protection System, patented by L&L) system, they are also tested to guarantee robustness and unchanging lighting quality down to a temperature of -20°, making them ideal for the Norwegian climate.

Light planning by Rambøll Norge AS

Delivered by SML Lighting AS 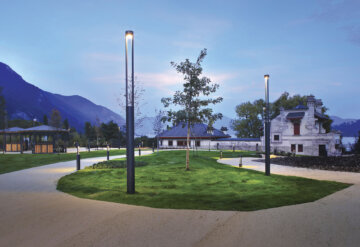 A new park to celebrate biodiversity