Home » FOCUS (Classic, Design, Technical) » Ale is characterised by the tongue-in-cheek detail of the fly resting on the dome 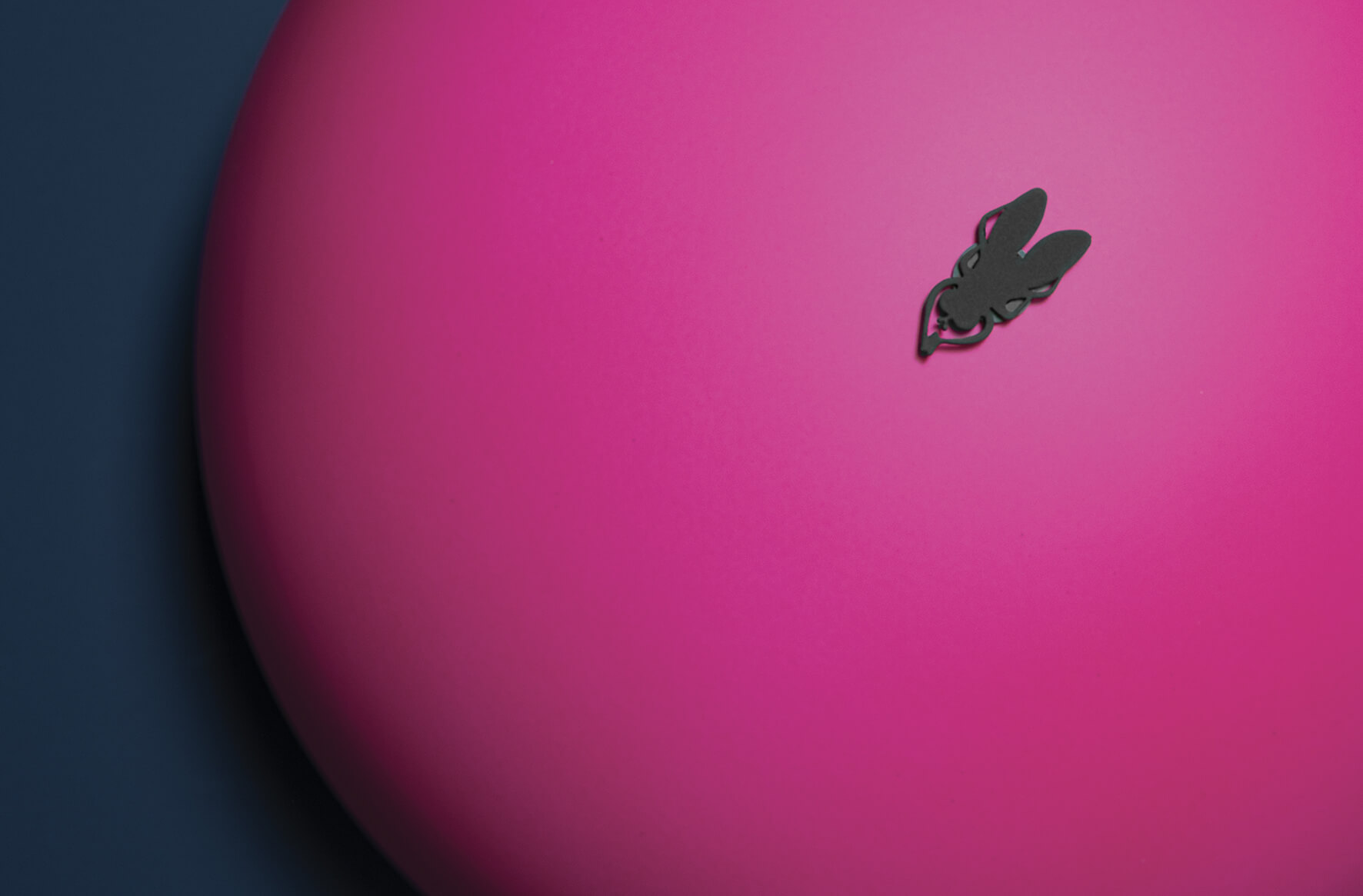 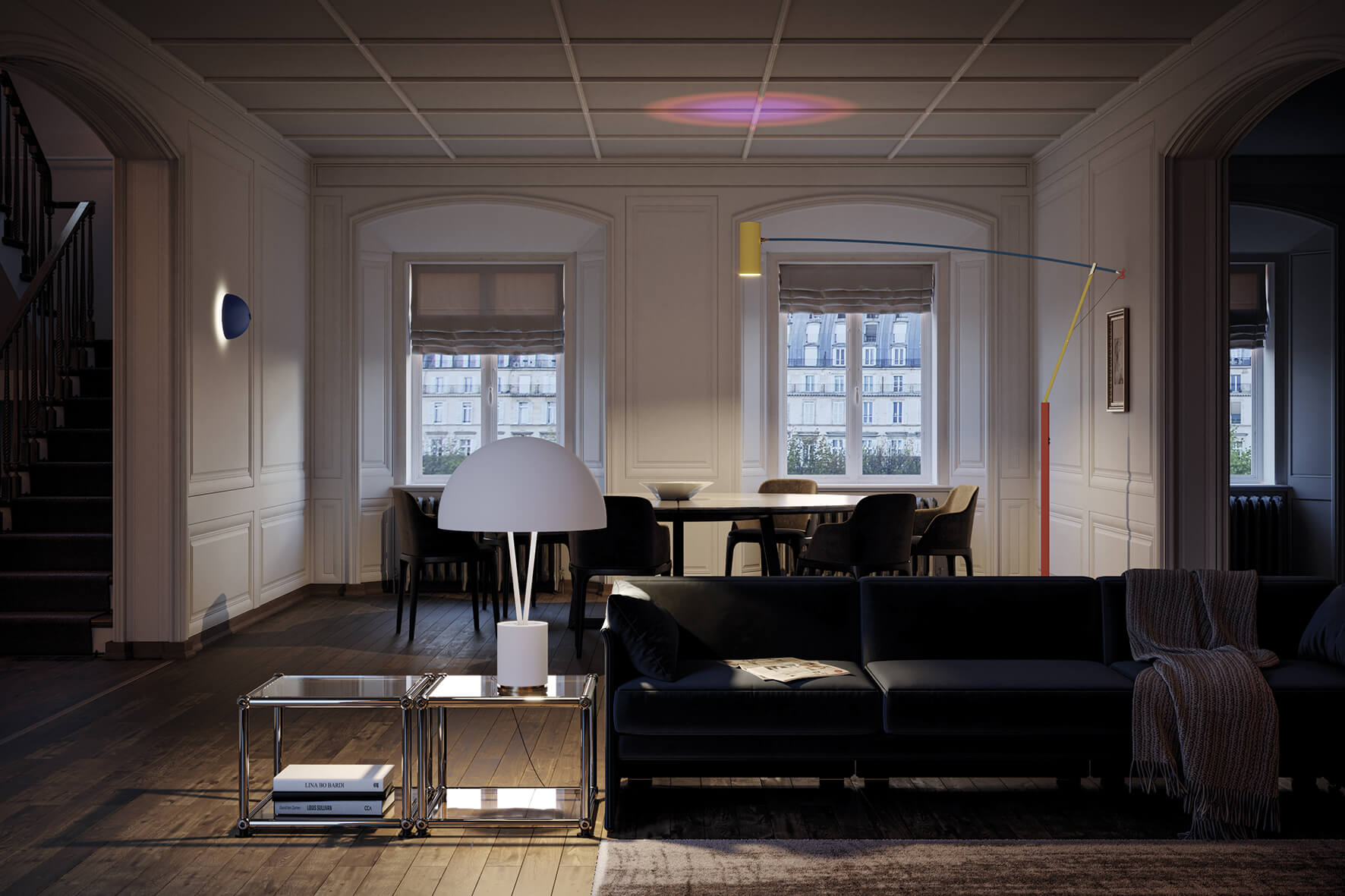 The semisphere is the hallmark feature of the new Ale range, composed of four different models: BE T, C, BIG and W.

Ale BE T is a wireless, battery-operated table lamp, so it can be moved around any setting. A small cylinder links the circular base to two slender elements forming a “V” shape. These support the dome that can be rotated on a single axis, to direct the light produced by a 1.5W (220lm) LED. The unexpected detail of a fly resting on the dome conceals the screw that attaches it to the base of the lamp. As well as in black and white, Ale BE T also comes in a lively fluo-painted version (orange, blue, yellow and magenta), and with a “colourful” finish featuring a combination of the primary colours blue, red and yellow.

The same finishes also appear on the ceiling version, Ale C, composed of a base with a diameter of 9 cm and a cylinder, departing from which are the two “V” shaped elements that support the dome in aluminium, which has a 9W (1400 lumen) COB LED concealed inside. Thanks to the lens featured, part of the light emitted is concentrated in a characteristic circle of light on the ceiling.

Ale BIG is an elegant table lamp with a height of around 75 cm. The dome, with a diameter of 50 cm, is supported by two vertical elements forming a “V” shape, resting on a solid cylindrical base embellished with brass details and an engraved, glazed logo. The light source, a 15W (2200 lumen) COB LED, is equipped with a lens that spreads the flow of light over an angle of 340°, guaranteeing a significant amount of light, which can be adjusted using the red button on the base. The inside of the shade varies in appearance depending on the finish: in the “colourful” and flue versions, it is white, while the black and white finishes are covered by the distinctive gold leaf.

The Ale W wall version is the purest form of the semisphere. Thanks to the telescopic mechanism the wall support is equipped with, the shade can be distanced from the wall, thus varying the diameter of the luminous edge produced by the 13W (2000 lumen) LED board. This model, available in the black, white, blue or magenta fluo finishes, is also characterised by the tongue-in-cheek detail of the fly resting on the dome. 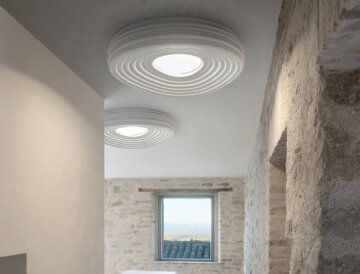 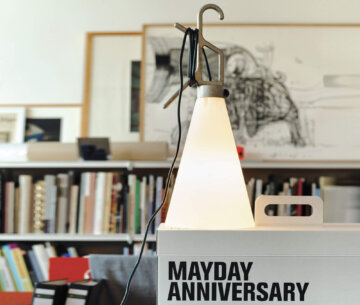 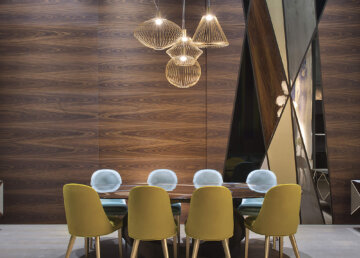