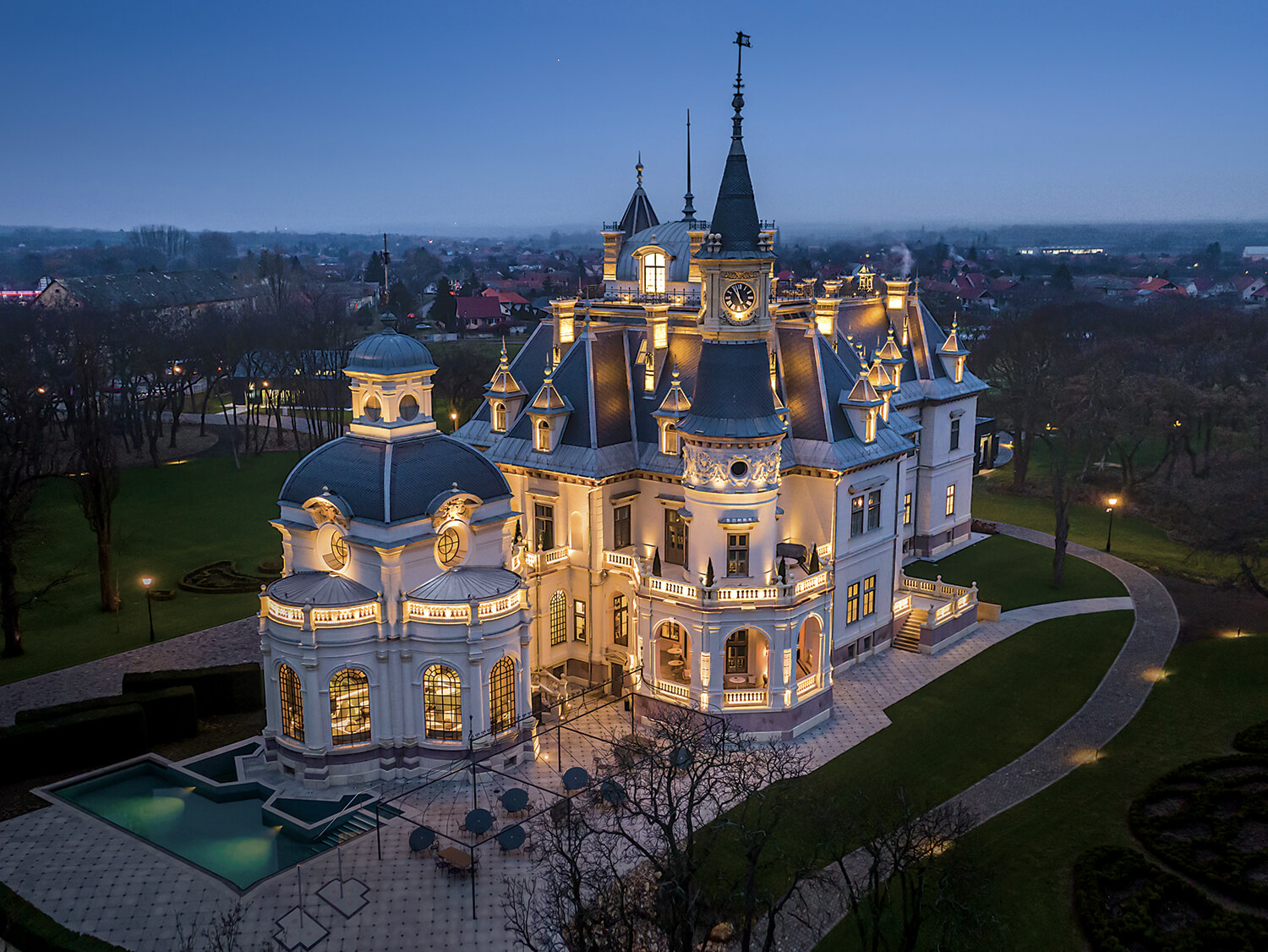 Magical lighting for a fairytale castle

“Once upon a time…”: those familiar words that mark the opening of so many fairy tales immediately evoke a romantic story full of nostalgic episodes depicting times gone by. And the concept is a perfect fit for the fascinating Botaniq Castle in Tura, Pest County, Hungary. This Disneyesque castle has been returned to its former glory after a restoration that involved transforming the entire building from an erstwhile aristocratic residence into a modern luxury hotel.

The castle’s story begins in the 19th century, when Sigmund Schossberger, a local sugar magnate made a baron by Franz Joseph I, built this magnificent neo-Renaissance residence in 1883 and equipped it with state-of-the-art amenities. Over the years, Schossberger Castle was passed down to the baron’s heirs until being used to house first the German army and then the Russian, during World War II. After the war, the castle was nationalised and used as a school until 1973; it then had several owners who neglected the building’s upkeep, so that it had fallen into disrepair by the end of the 20th century. The year 2016 was an important one in the castle’s history, when the decision was taken to completely renovate the building and restore it to its former elegance.

The restoration included a new lighting design for the exteriors, carried out by 3F Project. The Budapest-based lighting design studio used lighting solutions by L&L Luce&Light to fulfill the client’s desire to accentuate the entire building, emphasising the castle’s architecture and surroundings with light. L&L’s lighting fixtures were used in different areas in the structure, starting with the main entrance, where customers are greeted by an imposing arched entrance. It is flanked by a tall, cylindrical tower with a series of rectangular windows along its whole height. On the sills of each window in the entrance and the tower, and on those of the arched dormer windows, 3000K, 7W Lyss 1.0 projectors were installed. Their 20°x180° frosted optics create a semi-circular blade of light that emphasises the windows’ internal profile.

The castle complex includes a building with a square floor plan that houses the restaurant. Each of its sides is further embellished by three large windows overlooking the terrace and outdoor pool. To emphasise the stone balustrades that mark the contours of this building, Trevi 3000K linear profiles with 40° optics were used, in different lengths. The same lighting solution was adopted to light the other stone parapets that outline the castle’s walls. The team of lighting designers from 3F Project also used several 2.0, 3000K, 16W Siri projectors with 40° optics in a customized DALI version. The fixtures are directed at the circular windows, with curved cornices adorned with stone coats of arms, on the first floor of the structure housing the restaurant.

Other L&L fixtures, such as the 3000K, 3.5W Bright 2.8 recessed uplights with 41° optics, tiltable ±15°, were installed close to the walls on the first-floor terrace, while Step Outside 6.3 step lights with asymmetrical optics pick out the steps leading from the front courtyard directly into the restaurant.

The renovation also extended to the extensive park, made up of over ten hectares of greenery framing this magnificent hotel. The project aimed at restoring these grounds to their original form of an English landscape garden, by planting new trees and renovating the old paths that used to cross the lawns. To light these paths, 2.1, 3000K, 12W Plin bollards were installed at regular intervals. These feature a 90° tilted head that holds the light source with diffuse asymmetrical optics.